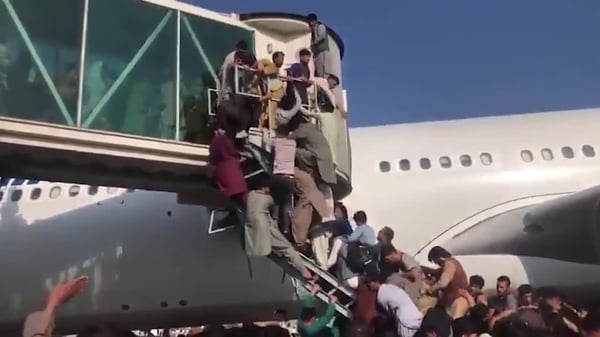 Taliban in control in Afghanistan after seizing presidential palace

Taliban in control in Afghanistan after seizing presidential palace

1. Afghans clamber onto plane to flee country after Taliban victory

This is the moment hundreds of desperate Afghans clambered onto a plane to flee from Taliban war lords.

Harrowing footage shows dozens of people jostling to enter the plane cabin, climbing over each other on the ladder of a parked plane at the Hamid Karzai International Airport on August 16 morning.

Afghanistan’s capital Kabul fell into chaos as thousands tried to flee from the Taliban yesterday.

Footage shows heavy traffic building up in the city on August 15, with both vehicles and citizens on foot converging on the roads. Banners and flags were also seen being waved from a flyover.

Hundreds of Afghans raced to an airport in Kabul as the Taliban took control of the Afghanistan’s capital city.

Footage shows panicked locals, some carrying toddlers, running to the Hamid Karzai International Airport on August 16 amid screams and gunshots. The gunshots were reportedly fired by US forces to help marshal the desperate mob.

Afghanistan’s capital city Kabul was left in chaos after the Taliban successfully seized the country’s seat of power.

Footage shows locals on the streets and getting ready to flee as traffic started building up in Kabul on August 15.

Traffic gridlock and panic in Kabul has followed news that the Taliban have entered the Afghan capital on Sunday 15 August.

Video from the Karti Mahmurin area of Kabul shows completely gridlocked traffic. The filmer reported that the jam is four hours long and that chaos and panic are gripping the city.

Hundreds of Afghans fled with their suitcases as the Taliban took control of Afghanistan’s capital city of Kabul.

Footage shows civilians carrying their luggage and walking on an open road leaving Kabul on August 15.

The influencer is dead, long live the creator